We are delighted to continue working with Jessie Kirby as part of our team of riders in the UK.

After a successful International Pony FEI career with Grayswood Orlando and Charlotte Dujardin’s Cruz, Jessie has stepped up to Junior FEI level in 2019 with Belle Amie who is in her first competition season with Jessie including two internationals this year.

Jessie also owns Casper, pictured to the left, a 7 year old gelding by Apache who she bought as a 4 year old and is currently enjoying training and developing him and is hoping to start competing him at Advanced Medium later in 2019, he’s one to watch for the future!

Jessie’s favourite gloves from our range are Arabella which she likes for the feel they give on the reins and A Touch of Magic Tack for a little sparkle.

We would like to thank Daydream Equine Art for our use of several of their images on this page.

2019
Jessie made the decision to step up to the U18 teams a year early with great success in their first year
Selected for Junior squads
March – selected for Keysoe International with placings in all three Junior classes
Premier Leagues at Addington and Somerford winning the Advanced Medium at Somerford
Completed GCSEs!
Selected for Hickstead International in July 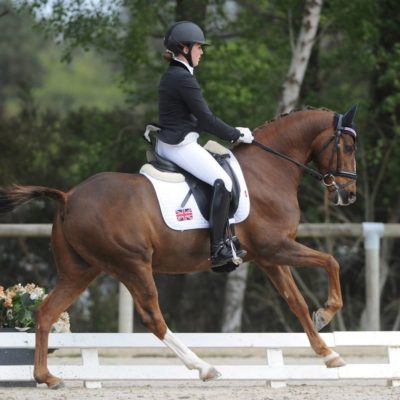